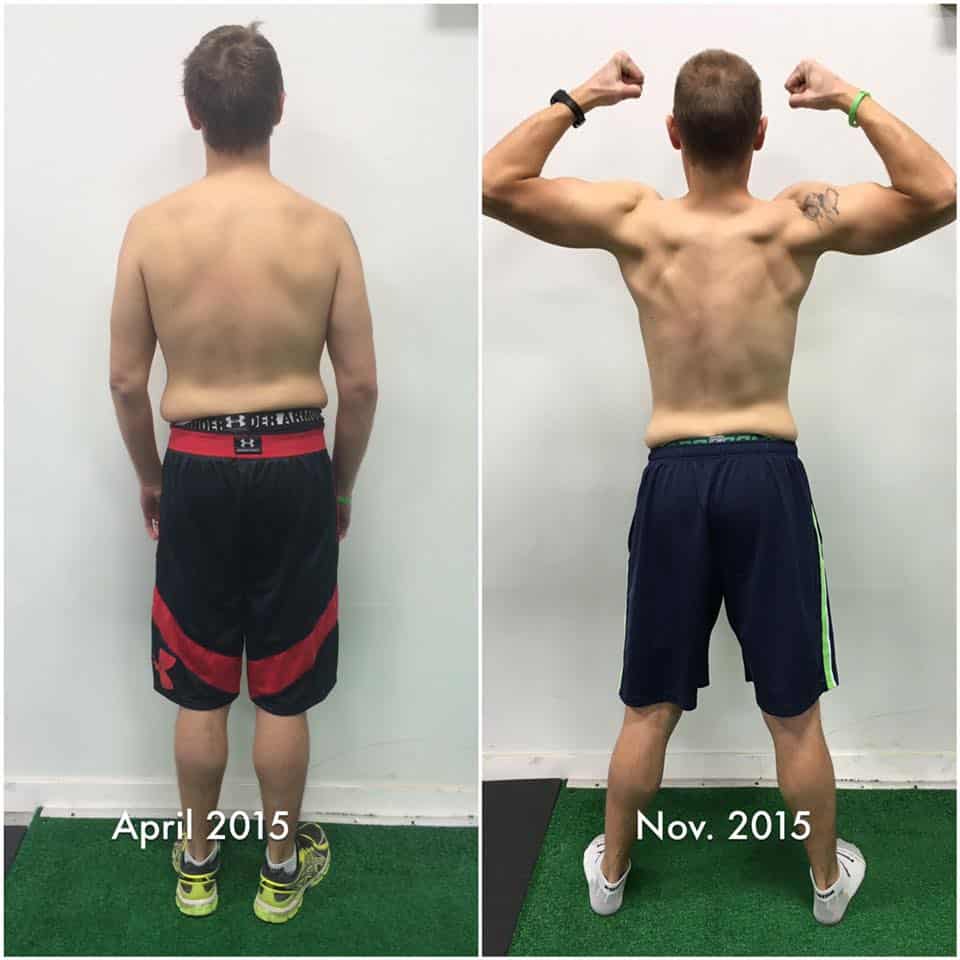 We just wrapped up our 8 week Fall Transformation Challenge last week. Chris was one of two winners of this Challenge. He’s been working with Figarelle’s Fitness since April 2015 and he’s made some tremendous progress in that time. Here Chris shares with us a little about his fitness journey.

Hi Chris! Please tell us a little about yourself.

Hey Figarelle Peeps! I was born in Portland, Oregon, but I was adopted by my family here in Alaska. As soon as the hospital allowed me to fly, they threw some bubble wrap on me, boxed me up, and shipped me to Alaska, where I have lived for the last 29 years. I graduated from Service High School in ’04 and then from UAA with a bachelor’s degree in Journalism in ’09.

I work at KTUU – Channel 2 and I have done so for almost twelve years. I work in the technical side of television, so if I ever make an appearance on-air, something has gone horribly wrong.

I’m also a diehard Seahawks fan and yes I became a fan in a time when crappy seasons like this year were not only the norm, but they were expected, and having more wins than losses was in fact a big deal. Win or lose I’m a fan and if the game is on I’m watching it. So it’s a good thing Boot Camps aren’t offered on Sundays.

How long have you been working with FF, and what initially motivated you to seek us out?

Laurel’s persistence is one of the big reasons I’m part of the Figarelle’s Fitness Family. Laurel tried multiple times to get Michelle and I to attend a boot camp, but we were always conveniently busy on Saturdays. Our busy schedule wasn’t enough to deter Laurel though and in April, she finally broke us down and dragged us kicking and screaming to our first guest Boot Camp. It was so horrible that we were members in less than a week. Thanks again, Laurel!

Since starting with us, what have you accomplished, both physically and mentally?

Even though I have a long ways to go to achieve what I want physically and mentally, I have made a lot of progress since I started with FF. I have a lot more muscle definition now and more stamina. Also FF has encouraged me to step out of my comfort level which is good because you can’t grow and improve if you are stuck in your safe zone. 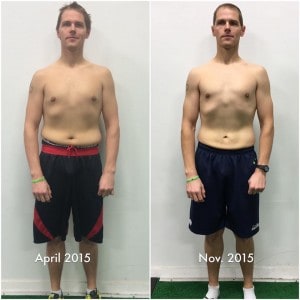 How has your diet changed since working with us? Any tips for those who may be struggling to adopt healthy eating habits?

Even before I joined this fitness family I was a pretty healthy eater, but now I am a lot more knowledgeable about what is best to fuel my body and I try to spread that knowledge to people around me. I went to dinner with my parents the other day and it just happened to be a restaurant that shared the calorie count next to each entrée on the menu. My father’s first reaction after seeing the calories count next to his favorite salad option was, “Well, we can’t eat at this restaurant anymore.” I had to explain to him that just because other restaurants don’t show the calorie count, doesn’t mean those calories aren’t there. I also had to explain that just because something is in the salad section of a menu, doesn’t make it healthy. Baby steps.

You and your wife Michelle often workout together. What’s it like to set and achieve fitness goals with your spouse?

I think it’s great to have someone who shares the same fitness beliefs and goals as myself. I know Michelle and I challenge each other and motivate each other to do better. It is like having an encouraging workout buddy, but the encouragement doesn’t stop at the end of the workout. It’s really fun to see the progress both of us have made.

Were you active while growing up? If so, what sports/activities did you participate in?

I was very active when I was younger and there are not many sports that I haven’t done. The sports I was best at were soccer, baseball and downhill skiing. I can remember multiple summers when I was playing baseball and soccer and would have games for both on the same evening. I would change from my soccer gear to baseball gear or vise-versa in the car on the way to the next game. I can only imagine what drivers were thinking when they passed the car to see me ripping my clothes off.

In the winters, downhill skiing was, and still is my thing. When I was younger my nickname was Eleven because I loved to point my skis straight downhill and just go. Even now I try to turn only when I have to, and happy to announce I’ve only hit one tree with this method.

You attend FF Boot Camp each week. What are a few of your favorite Boot Camp exercises?

My favorite warm-up is the agility ladder and my favorite workout routine is the hurricane. After a boot camp with these workouts I’m just dripping sweat and feel like I have definitely had my workout for the day. My favorite single exercise is the rope climb. When I first started at Figarelle’s I couldn’t climb the rope, mostly because of my poor technique. After a few weeks I was able to improve my form and I finally made it to the top of the rope. Now it’s a challenge to see how many times I can climb the rope in row.

How about a few of your favorite muscle groups to train? Why?

I don’t really have a favorite muscle group to work, but I love to hike during the summer, so strengthening my legs allows me to get up the mountains easier. I also like working on my arms and shoulders for vanity reasons. 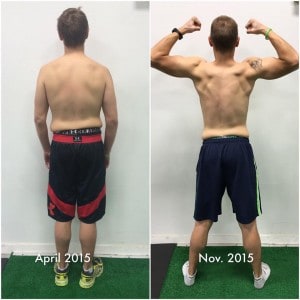 You are one of the winners of our recent 8-week Fall Transformation Challenge. What were your goals, and what did it take to achieve them?

My number one goal was to go the full eight weeks without soda or alcohol. This was a big mental challenge for me, and I put myself in many situations which are usually big triggers. Many times I had to ask myself what my incentive was to stay strong, and a lot of it came down to just proving to myself that I could do it. Also, I knew my fitness results would be a lot stronger if I refrained.

My second goal was to do 40 consecutive push-ups. Half way through the challenge, I strained one of my triceps which made it difficult to practice for a few weeks. With two weeks remaining in the challenge and only getting to the low 30s in push-ups, Steph lit a fire under me by asking me complete my goal in front of everyone on the last Saturday of the challenge at Boot Camp. With the fear of failing my goal in front of everyone, I went home and practiced every day for the remaining two weeks just to make sure I could nail those push-ups. Thanks, Steph.

My final goal was to lose 2+ % body fat. Attending five boot camps a week, eating healthy, and no drinking, I was able shed almost 3% body fat. The biggest factor in completing this goal was time. Everything adds up … Tracking meals, workouts, homework. I just had to make this challenge my priority.

What advice can you give someone who wants to adopt healthy exercise and nutrition habits but may not know where to begin?

The first step that needs to be taken is making sure the person really wants to change. Someone can have unlimited resources around them to get healthy, but if they don’t want to change, they aren’t going to. Another big step is making exercise/nutrition goals that challenge you. Even if you have to start small with these goal, at least you’re starting somewhere. When you have completed one goal, make a new one.

My third piece of advice is being committed. Like I have said before, there is no half-ass way to shed half your ass. If you want to change, you have to work hard for it, make sacrifices. Eat a little less, exercise a little more. Try to remove processed foods and extra sugar from your diet.

You’ve accomplished so many incredible things these last few months. What new goals do you have planned for the future?

One of my goals for the future is to continue working on my push-ups. Short term I’m hoping to get to 50 and 60 maybe even 100 after some time.

Another one of my goals is to beat my half-marathon time. I completed my first half marathon a year ago and I want to knock multiple minutes off of it. This was my first long style race and I didn’t prepare for it like I should have. This time I’m going to train hard and be ready.

I also want to knock multiple minutes off my triathlon time. I completed the Eagle River Triathlon earlier this year and was pleased with my results, but I know I can do better.