Fear as your best friend.

Fear is a subject that I talk a lot about with my clients. I’ve always considered myself to be someone who walks along the edge of life without breaking much of a sweat.

I’ve discovered as I’ve gotten older that I am more aware of the dangers of the world. I’m more cautious when making decisions that 5-10 years ago I wouldn’t have thought twice about. When I was young, I couldn’t wait to go bungee jumping. I thought it looked like the biggest thrill. Those who said that they’d never do it seemed odd to me.

On a recent trip to northern Thailand, I passed up the opportunity to go bungee jumping and I have no idea why. Sure it would have taken some effort to figure out the logistics, but I didn’t make it happen. I might have been a little scared.

Scared of what, exactly?

When I travel, I have to do at least one thing that takes me far from my comfort zone. On this five week trip to Thailand I wasn’t able to go Scuba diving, which is one of my favorite things to do, but I did get to explore an amazing cave hidden deep in the mountains of Mae Hong Son, Thailand.

A few days prior, my wife, Lela and I had gone trekking in the mountains bordering Myanmar and northern Thailand with our guide, Chan. She was an incredible cook and she knew the jungle like the back of her hand. 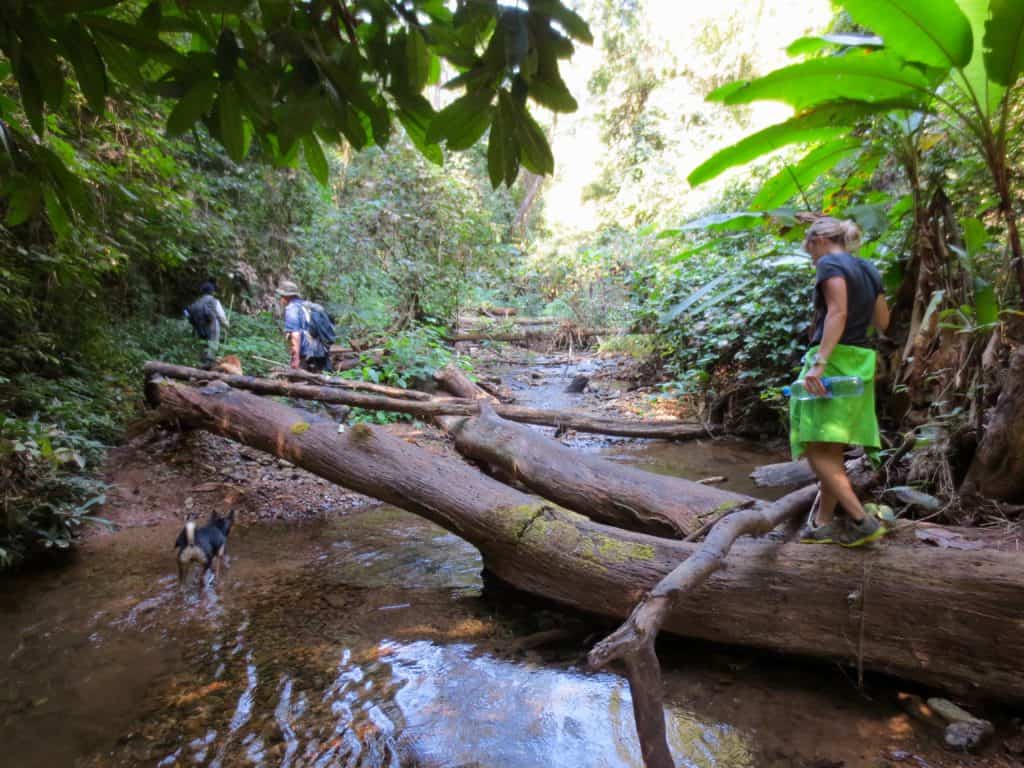 At the end of our adventurous two day trek, she excitedly invited us to join her for a day trek to a Buddhist cave the following day. She said that she had a dream about us going there with her and that this meant that it would be good luck for everyone if we decided to go.

Chan was extremely spiritual and constantly pointed out things in the jungle that were “good luck” to either touch, eat, or be in the presence of. We decided that a little extra luck couldn’t hurt us, so we gladly went with her to the Buddhist cave. It was an honor to be invited.

I had just finished reading the book, Courage and the Joy of living dangerously by OSHO. The premise of the book is to always go into the unknown. If you’re faced with two paths and one leads down a mysterious road and the other leads you down a familiar, beaten path, your job is to take the unfamiliar road.

That’s how you grow and change and find happiness. Color outside the lines, think outside the box, bend or break the rules.

Feel the fear and do it anyway.

Despite my overwhelming feeling of claustrophobia after ten minutes into this intense cave trek, I chose to put my fears aside and continue on for the 1 1/2 mile roundtrip journey. It wasn’t easy.

All we carried was a camera and two small flashlights for three people. I ended up clenching my flashlight in my teeth for most of the trek just so I could use both of my hands to traverse the slippery cave and not fall into the black abyss that seemed to sneak up under me from time to time.

I was too busy focusing on not dying to feel any fear.

The air became thicker and the deeper we went into the cave, the harder it was to breathe. Then there were bats squealing above us, and some large spiders on the rocks at our feet.

Then there was the fact that NO ONE on earth knew where we were at that place and time. We had no food and water with us either. It’s really easy to let your mind wander when you’re faced with the unknown.

Human beings are professional worriers. We waste a lot of brain power figuring out all that might go wrong and we tend to focus very little on everything that could go wonderfully right. We use our imaginations in the wrong way when we do that.

The funny thing about fear is that those who do courageous things feel fear, they just choose to do the scary thing DESPITE the fear. It’s always there, but that’s what makes the mysterious endeavor so amazing. If there was no fear, there would be no adventure. Fear can be your best friend.

A quote that I live by goes like this, “Fear is an indicator. It tells us what we have to do.”

Really think about that.

Whatever you fear at this moment, is the exact thing you must go out and do. Once you do it, the fear just kind of falls to the wayside and disappears. When you were a kid, everything was new and mysterious. Every day was an act of valor because you were thrown into the unfamiliar and forced to adapt and somehow survive.

The difference between then and now is that we overthink everything as adults. Our minds get in the way of living life and we rarely get to have novel experiences anymore.

You don’t have to travel abroad, go bungee jumping, or venture into a dark cave to live life to the fullest. But then again, maybe you do.

If this is you, then you’ve just built an impenetrable wall around yourself and you’ve probably been convincing yourself of your perceived limitations for years. Your excuses are powerful, self-fulfilling prophecies that keep you trapped like a caged animal. Be afraid, but do the thing you are afraid to do anyway.

There is an energy, a VIBRATION that courses through your body when you go into the unknown and it reminds you that you’re alive. The freedom that you acquire from adventure and choosing the unknown will carry over into every area of your life. You’ll be a better parent, spouse, employer, and human being. You’ll be happier and more fulfilled.