Get to know FF member, Jenni!

1. Hi Jenni! Please tell us about yourself.

I was recently laid off from my position as an interventionist for Russian Jack Elementary (an interventionist is a position specific to title one, or low socoieconomic status school). As an interventionist I worked with students who were below grade level targets in math or reading. I’d work with them in small groups or one on one to provide the support they need to get back on track. Currently I’m substitute teaching and interviewing for teaching positions for the fall. Teaching is something I’m incredibly passionate about, and it’s how I serve my community. 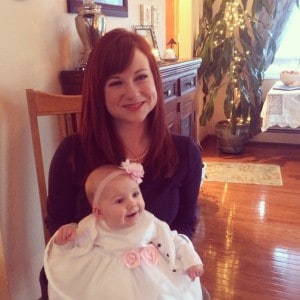 I have a 10 month old daughter named June, and she was born on summer solstice. I absolutely adore her, and becoming a parent has been an amazing new adventure. I’m also married to my best friend, Jeremy. We both love music, being outdoors, cooking, and scotch.

I went to culinary school before I went back to college for teaching, and I love food! over the past few years I’ve taken up gardening and it’s been a great experience to grow my own veggies and herbs in the summers.

I’m a nerd. I love to read, and I’m pretty shy until you get to know me. I’m also a musician, and I sing in band called The Modern Savage. I’ve also played classical/flamenco guitar since I was 8 years old.

2. How long have you been working with FF, and what motivated you to seek us out?

I’ve been working with Figarelle’s Fitness since 2010. I did private training with Steph, and then took a break for a year and recently returned to join bootcamp. I found Figarelle’s Fitness online, and I was really impressed by Steph’s writing on her website. I was working an office job at the time and I had a lot of weight to lose. I had dieted before, but never focused on transforming my body to make it stronger.

3. What Boot Camp classes do you typically attend, and what are a few of your favorite things about Boot Camp?

I go to Tuesday night bootcamp. Once summer vacation hits I’d love to attend another bootcamp night as well. I love how supportive everyone is at bootcamp. I’m constantly asking questions and people are always quick to help, high five, or remind me to push myself. I  also love doing the impact challenges. They’ve been a great reminder of personal growth over the past few months.

4. Tell us about your band, The Modern Savage.

I’m lead vocalist in an indie rock band called The Modern Savage (https://www.facebook.com/themodernsavagemusic). We’ve been playing together since 2010, and we’ve shared the stage with Foster The People, Silversun Pickups, and Owl City. We were also in a national web documentary series “American Hipster Presents” that focused on art and culture in 10 cities within the U.S. (If you want to check out our episode here’s a link: https://www.youtube.com/watchv=lqynTXROMxQ&noredirect=1) We’ve also played live at a bootcamp! 🙂 We recorded our first full length album “Subtle Advances” at Studio 2200 in Anchorage, Alaska. The album was produced, engineered, and mixed by NYC based producer and recording engineer James Frazee. James Frazee’s discography includes Esperanza Spalding- Radio Music Society, Sharon Van Etten – Are We There, Patti Smith– Capital Letter, and many others.

If you want to check it out our music is on iTunes, or streaming on Spotify at: https://play.spotify.com/album/4c4c2J70iDPLHbGzrqmRxp. I recommend listening to June Bride, Pusher, and 4th of July first. I love music, and my bandmates are my second family. Writing and performing music brings me  indescribable joy.

5. Who are some of your musical influences?

2014 was a big year for me. I earned my BA and my teaching certificate, I released The Modern Savage’s first full length album, and I lost the 30 pounds I gained during my pregnancy. 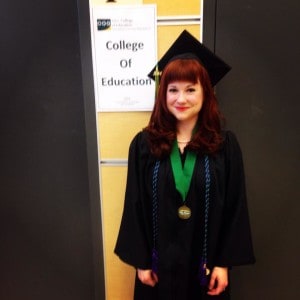 Earning my degree was a powerful thing for me. For the first few years I went back to school I was working 40 hours a week and going to school at night. Recently, I found a piece of paper I wrote in 2011 with a plan of all of the classes I would need to take each semester from 2011-2014 to get my degree. It felt amazing to see that I had accomplished it. It took years, but I stuck to my plan.

7. What was the last book you read? Tell us about it.

I just finished reading Kim Gordon of Sonic Youth’s memoir Girl in a Band. It was incredible to read such an intimate glimpse into the late 80’s early 90’s music scene (think Sioux and The Banshees, Nirvana, Pixies ext.), but to hear a female’s account really moved me. Rock music is a heavily male dominated industry with women being pigeon holed into predefined archetypes, Kim Gordon exposes that in her book and advocates change.

8. What is one of your favorite quotes? Why is this particular quote so special?

I’m going to include one from Girl in a Band, because it’s so fresh in my mind right now:

“In general, though, women aren’t really allowed to be kick-ass. It’s like the famous distinction between art and craft: Art, and wildness, and pushing against the edges, is a male thing. Craft and control, and polish is for women…. At the end of the day, women are expected to hold up the world, not annihilate it.”

There’s a fear and resistance that happens when women are uninhibited and powerful. Gender should be irrelevant in self expression.

9. If you could witness any event past, present or future, what would it be?

10. If you won the lottery, what is the first thing you would do/buy?

I would wander the world with my family. We love to explore new places.