Why fat loss is so difficult.

Google “fat loss” and you’ll be overwhelmed with so much information (and misinformation), your head will spin. There are hundreds of thousands of fat loss resources at your fingertips; the internet, bookstores, and the library. Not to mention those well meaning people at your gym who don’t know the first thing about fat loss, but won’t hesitate to share their opinion on the subject.

Even though you can learn everything there is to know about the theory of fat loss, actually losing body fat is rather difficult. In fact, fat loss is nearly impossible for most people. It’s one big mind fuck. It’s a daily struggle of willpower. It’s painful to go to bed hungry and it’s simply not natural for the human body to endure. When I say it’s not “natural,” I mean that the body will always fight change. Our bodies strive to stay in homeostasis and you will experience supreme discomfort if you try to disrupt it.

How will your body fight fat loss?

In no particular order, here are a few of the mental and physical issues you’ll likely encounter while attempting to lose body fat:

Sexy right? You’ll never read the truth on a bottle or brochure selling fat loss. You’ll only read the words of false hope and remain disappointed and misled until you’re ready to accept the truth. Fat loss = pain and suffering. It is necessary to be able to endure this if you ever want to see definition in your legs, or know what your six pack abs look like under the fluff.

Fat loss is a submissive process. It’s a journey of learning to yield.

If you attempt to put up a fight and resist the process, you will lose. Always.

How will you lose?

Well, you won’t actually lose any body fat. You’ll just lose the game of fat loss. You will stay the same, or actually end up gaining body fat if you resist too much. 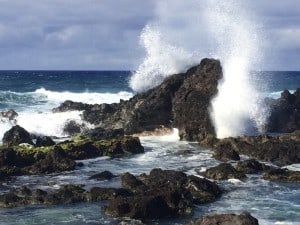 When you’re hungry, just accept it’s part of the process, and find a way to distract yourself. Go to sleep. Go for a walk. Go brush your teeth. Do something other than sit and think about how fucking hungry you are. Don’t complain about it because inevitably the people around you will just tell you to shut the hell up and to go eat something.

Unless of course they’re also trying to lose body fat, in which case misery loves company. So, I recommend surrounding yourself with supportive people who are also hungry.

A story of submission: When I was eight years old, I visited the island of Oahu for the first time. I had never swam in the ocean, but I grew up around pools and lakes, and considered myself a competent swimmer. One afternoon, I went out to play in the waves alone, leaving my family behind on the beach. As I carelessly frolicked in the majestic ocean, giddy with excitement and oblivious to any potential danger, I suddenly felt myself getting pulled further and further away from shore by a powerful rip current. When I recognized that I was getting violently pulled out, I attempted to swim back to shore as fast as possible. This aggressive struggle to save myself was futile.

Realizing that I would be unable to swim back in, I panicked. I managed to get myself close enough to shore where the waves were breaking, but it was no use. As soon as a wave came crashing in, it pulled me under the water and proceeded to spin me like a demented washing machine. I was pinned underwater for a few seconds, the sting of salt water filling my sinuses and burning my eyes. I resurfaced and tried again to swim as hard as I could back to the beach, but I couldn’t fight the intensity of the rip current pulling me back out. This scenario played out over and over again until I was so exhausted I could hardly move.

It took a few rounds of learning the rhythm of the waves, but I eventually figured out how to go with the flow of the ocean and ride mother nature’s roller coaster back to safety.

I stopped trying to save my life my way, and allowed the waves to carry me in their way. This is a perfect example of submitting to something more powerful than us that requires a process and a stragety. I stopped fighting, relaxed my body, and I let the waves effortlessly carry me back to shore. As soon as I stopped resisting, it was only a matter of seconds before I was back to safety. It was like the ocean was teaching me a lesson or something! (Obviously it was, because now I have this handy fat loss analogy to share with all of you).

Fat loss must be approached in the same way.

You need to understand before starting your fat loss journey that you will encounter many difficulties that are powerful enough to make you quit. You probably won’t die, but giving up on your goal just because shit gets too hard is just as bad, in my opinion. You will plateau, you will feel awful some days, and you will get discouraged. But don’t give up. Simply yield to the process and let it happen to you and for you without you attempting to interfere with brute force.

Delaying instant gratification and experiencing some deprivation is healthy and liberating. I know I probably sounds like a lunatic to some because we live in a society where literally every single one of our needs is constantly met. There are no opportunities to experience deprivation, unless we purposely inflict it on ourselves.

As your body adapts, eventually your pain and suffering becomes your body’s new comfort zone, and you will experience less hunger and less fatigue. You will have more energy, and endurance as you lose body fat and lighten the load on your heart and joints. You will feel better about life, and about health. Your mood will be more positive as you build confidence in what you are doing, and you will gain clarity and discipline in other areas of your life as well, but only if you’re willing to relax and ride the wave.